I turned (inaudible mumble) years old on Friday. My wife’s friends from the hospital had tickets to Disney on Ice Treasure Trove at the Long Beach Convention Center so they let our munchkins join in with them while we celebrated at dinner.

We walked from the Convention Center to 555 East American Steakhouse, creatively named after its street address and the type of food it serves. Why not call it Steaks Served Here or something?  We walked in a few minutes after 7:30. It was busy but not packed by any means so we probably didn’t need to make reservations. Inside it’s dim lighting with dark wood and felt classy. Our table was the near the front window where it was lit better. 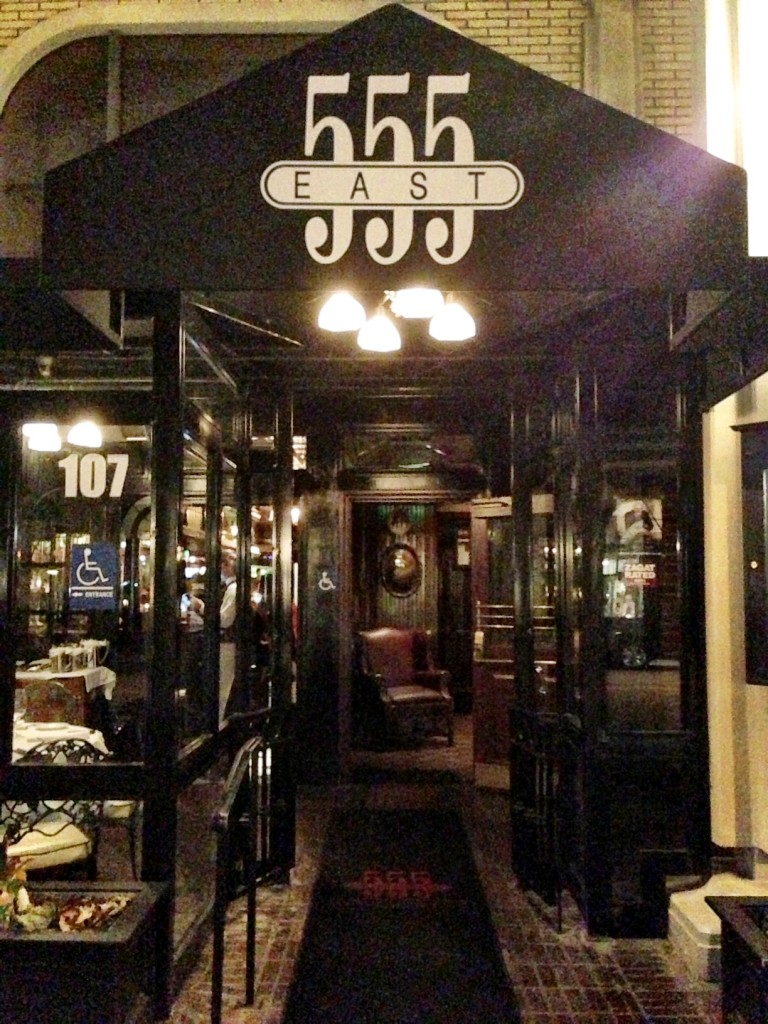 I began with a Sicilian Old Fashioned which is Woodford Reserve bourbon, Fratelli Averna Amaro, pieces of fruit and a splash of soda. Imagine bourbon without the bite, but rather sweetness mixed with orange pulp shooting up a thin straw like a snake swallowing a rabbit. I was less adventurous on my second drink and ordered Woodford Reserve with three cubes.

My wife and I are different eaters. She enjoys the basics, tried and true food she knows she likes and she’s content. I’d rather take those elements and add a bunch of other shit I like with it. So I ordered the Prime Culotte steak Oscar Style, which means it’s served on a bed of asparagus, topped with chunks of crab and slathered in béarnaise sauce. It was epic. The garlic mashed potatoes adjoining the steak were creamy and mixed well with star of the plate on every bite. 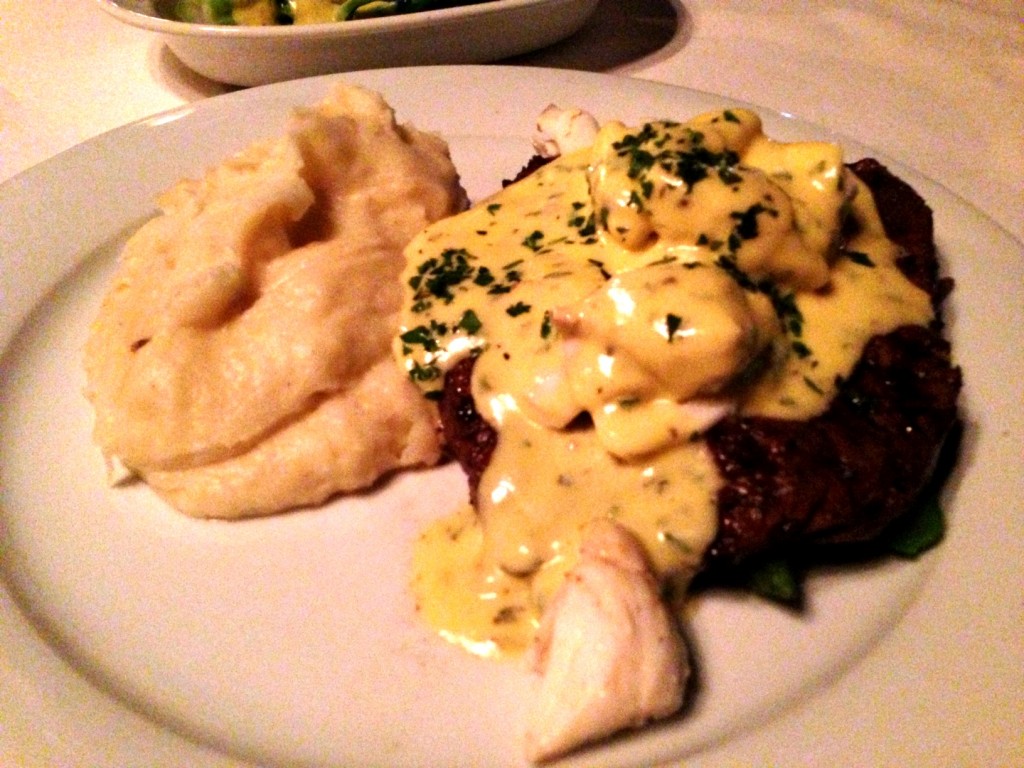 We made it back to the Convention Center before the end of the show. My wife had to pee so we snuck in to the performing arts section of the building before heading back outside. A few minutes later the show ended. We ran into our friend Ryan who led us beyond security guards at the doors and through a sea of guests trying to exit to our families taking pictures in front of the stage area. The moms detailed Gray and Ellie’s excited reactions to the show, we all chatted and made it back out front after security asked us to leave.

We talked outside some more as the kids played. Gray came over, asked me to pick him up and told me about the show and talked about all the girls. I asked if there was a pretty girl and he confirmed. I put him down and asked me to show him who was pretty and he immediately pointed to an 8-year-old with blonde curled hair and sparkling blue eyes. Then he stomped on her foot, as if a script writer from the 1940s wanted a school boy to flirt with a school girl. So he’s off his cougar kick – for now.

We ended the night with our first experience at Yogurtland, changed the twins into pajamas in a nearby parking lot and watched girls cut through the lot in their best clubbing outfits. I told Gray they were going to go shake their booties and he legitimately got upset and said “No mommies shake their booties.” So he’s a flirt that but he respects you, ladies.

We all slept in after a late night and then made it to another t-ball class. Not enough kids showed up on the other team so we had to split up. Due to the few in attendance each child got more at-bats, but Gray and Ellie dragged and it showed. Ellie melted down in the last inning and I held her out in the field, her head on my shoulder, which she never does.

At night we had plans to meet up with my wife’s work crew to celebrate other birthdays. In addition to mine on Friday, Ryan’s was Saturday and my wife’s is on Tuesday. We met back in Long Beach at K.C. Branaghan’s to start. Avoid that place unless the price of a dollar means nothing to you. Jager bombs, which the wife and I tossed back to start, are $10 each and a Jack and Coke is $8, which is pretty ridiculous if you consider that we’re not  on the Las Vegas strip and it’s a beach Irish bar, not a trendy club in downtown Los Angeles. 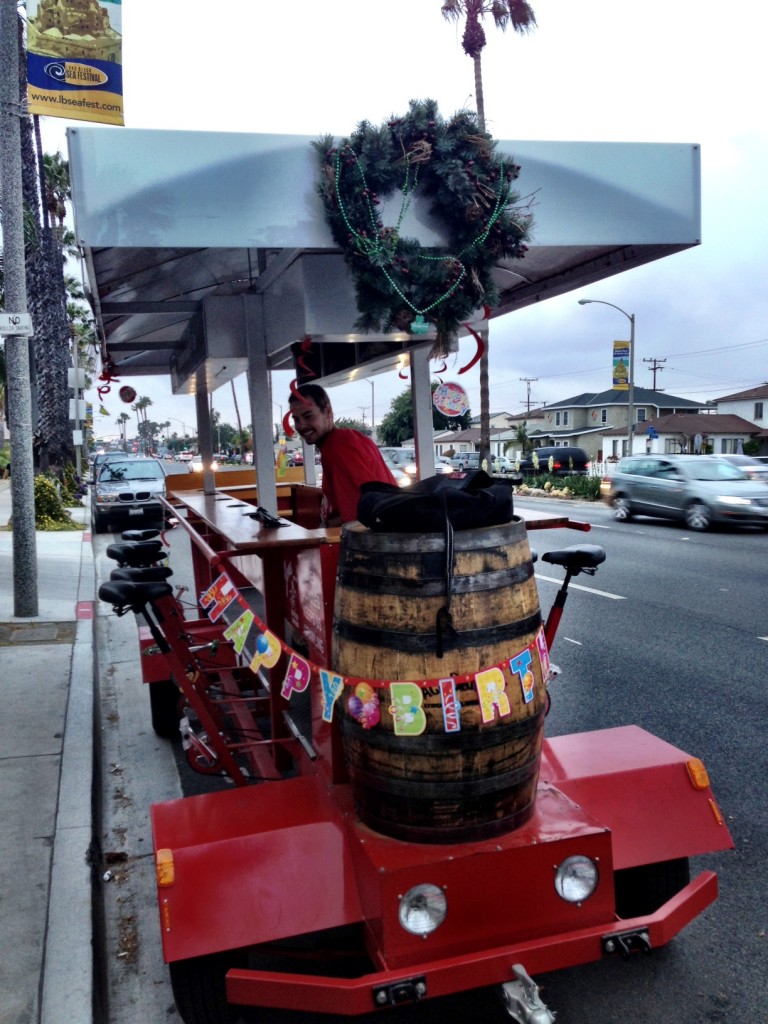 Waiting for us after we left was a 15-person bicycle from Long Beach PediWagon powered by us, the drunkards, and steered by a captain from the company. The bike had a stereo and a bar table with cup holders. Drinking isn’t allowed due to recent advice from the Long Beach Police Department but if you wanted to smuggle your own in a Taco Bell cup or water bottle full of “just orange juice” then the table worked nicely. PROTIP: If you get a little loose with your sandals, like I do, store them above your seat and pedal barefoot, or else you’ll lose it in the middle of of 2nd Street. And it might happen twice.

We pedaled our way to four miles per hour, blocked the right lane of traffic up and down 2nd Street and hopped from bar to bar to refuel. The Mayweather-Guerrero fight kept us out of a few bars due to cover charges so we dumped our money into the friendly establishments that didn’t air the fight. And that turned out to be plenty before we biked our way back to our starting point and stumbled into Crow’s Nest, a dive bar with affordable drinks.

The night ended at the Harbor House Cafe in Sunset Beach. I swear we were the oldest people there by a good ten years. A burger and fries helped ease my stomach for an uneventful, passed out ride home. Which is always a good end to the night.

Every joint in my body ached. Every. Single. Joint. My shoulders, my low back, my elbows. It’s what happens now when I drink. The dehydration from boozing the night before sucks the life out of me. Still, the twins and I made it to church for our second to last service before it closes.

I spent the rest of the day relaxing these old bones and watched the Angels lose. Again.

6 thoughts on “Bikin’, Boozin’ Birthday – How Was Your Weekend?”