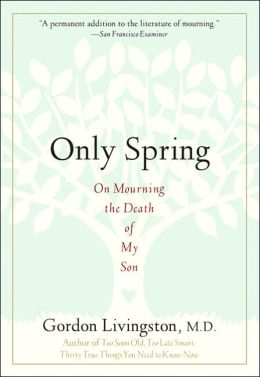 My therapist loaned me a book from author Gordon Livingston entitled Only Spring, based on the journal he kept after the news of his 6-year-old son’s diagnosis with leukemia and ultimately the agonizing cycle of faith lost and hope gained.

I’m in the faith lost part of it all in my life and I’ve forgotten the definition of hope. I mentioned my blog to my therapist so she told me about Livingston’s book. It seemed like a good fit on multiple levels. It only took the foreword to inspire me to share.

Written by author Mark Helprin – educated at Harvard, Princeton and Oxford and served in the Israeli Army, Israeli Air Force and British Merchant Navy – the foreword hit a nerve. It struck my longing to clutch Jax tightly once again.

Whether Lucas (Livingston’s son) rose into a world of light or was taken with a roar into waves of speeding darkness as if into the deep ocean, he went alone. The way I see it, he is either clasped tightly to the breast of God, or there is no God. One way or another, he has given his father, and in some respects all of us, a great gift. He has made death a prospect of fulfillment, an excitement, for what greater need is there but to find the lost child, or at least to chance that one may find him? If you were on a ship battered by immense waves (and, believe me, you are) that swept your child from your arms would you not (given that you had no others for whom to remain) throw yourself into the deep, hoping for the chance that in the vast black ocean you might grab onto him? Comforted just to know that you would suffer the same fate?

And if you had to remain, to protect others, would you not dream all your life of the day when, your responsibilities over, you would finally get to the sea?

I’ve mentioned before in this space that my wife and I no longer fear death, and Helprin’s words explain exactly how I feel. For now, we’re here to protect our twins. But I will dream every day of hitting that sea and feeling his little hands in mine again.

5 thoughts on “Dreaming of the Sea”