We took the twins to their first Angel game of the year. Really all they cared about was seeing fireworks, which they’re kind of obsessed with. Gray found one of Jax’s rubber baseballs in an Angels mini bag from when he was young and asked to bring his glove along. We sat down in our seats in the club section near the left field foul pole in the bottom of the first inning. And we didn’t get up until after the fireworks. 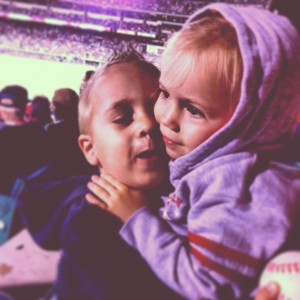 Gray loved the entire thing. Imagine being able to scream to your heart’s content and finally not get in trouble for it. When he wasn’t eating, he had that ball or glove, if not both, in his hands. He watched Mike Trout get a base hit (a phrase he now loves) and that 20-something drunk guy almost fall into my wife’s lap every time he climbed the stairs.

Ellie, however, was nervous from the start. She made me hold her as we walked into Angel Stadium and to our seats. After the sample fireworks shot up in the fourth inning, she asked to leave, and for “no more fireworks.”

Led by Villa Park native Mark Trumbo and his 3-for-4 night with two runs and a run batted in, the Angels clipped the Yankees 5-2.

As the fireworks show began, Gray jumped on to my lap in fright while Ellie rested in her mom’s arms. Both pulled their sweatshirt hoods over their ears to soften the sound. Ellie held up nicely and after Gray’s early jitters, he came around and enjoyed the finale, as I recorded here.

My wife changed the twins into pajamas in our minivan as we waited for the packed parking lot to empty out. Ellie told me she didn’t want to go to another Angel game. Even if there weren’t any fireworks. Which crushed my soul. Gray loved it and wants to go back.

Red tail lights filled the lot so we hung out in the van as Gray and Ellie goofed off. I snapped this strange image of Ellie and made a gif of it. I think she looks possessed, but my wife disagrees. Click on the image to view.

The wife and I apparently felt a little profuse with the twins after she found a 20 percent coupon in her email inbox, so we went to Toys R Us. It’s fun to let the rugrats run around the store to see what interests them.

Gray happened upon an aisle of board games, stopped at this one and said “Hi, Sheldon.” 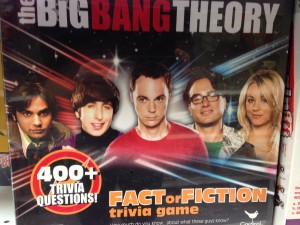 Big Bang Theory board game at Toys R Us.

When I met back up with my wife I told her that he’s probably watching The Big Bang Theory too much. She smiled and said he and Ellie ask to watch the show every morning, and know most of the characters.

My cousin Sean graduated from Sonora High School. In the afternoon we went to his grad party at my aunt and uncle’s house, caught up with family and enjoyed some tacos.

From there we sped over to Long Beach State to catch a dance recital in the Carpenter Performing Arts Center for our friends’ three girls and their dance academy. We sat towards the back in case we had to sneak out with one of the twins. But that wasn’t needed. The music, lighting and dancers enthralled Gray and Ellie. And they each got to sit in their own seat, which they loved. I peeked over at Gray and occasionally found him rocking out.

The kids got a little restless during the 90-plus minutes we watched, but just changed seats or sat on someone else’s lap and read the program. Intermission hit and while we wrestled with the idea of going home the people in front of us commented on how well-behaved Gray and Ellie were, and thanked us for letting them enjoy the performance.

Since it was after 9 p.m. and the babies hadn’t eaten dinner yet, we decided to leave, grab some In ‘N Out and Yogurtland (my wife’s addicted) and head home.

When I woke up I knew exactly what I wanted to do today. Try not to make anything of it being Father’s Day, get the kids to my parents for regular bi-weekly babysitting, go home and get blotto.

My wife had to work tonight. After two super late nights for the babies, they slept in until 10:15 a.m. She scored us a late breakfast from Burger Basket and otherwise I wanted to just forget that this was my first Father’s Day since Jax died. But a loving wife and two 2-year-olds that memorized “Happy Father’s Day, daddy,” ruined my plans. And I love them for it.

I watched baseball and opened gifts. Once I started to break out these engraved pint glasses I lost it. I cried as I first removed Presley’s glass. Fittingly, Jaxson’s was the last I removed from the bag and tissue paper. I sobbed. 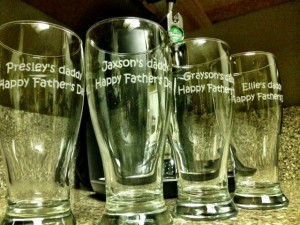 Father’s Day gift, all four of my children’s names.

My dad’s sister (my aunt, because that’s how these things work) was visiting from Northern California so my dad grilled some burgers and Mahi Mahi. The twins and I celebrated my dad while my wife worked at the hospital. My plan to make my liver work over time was on pause.

After some quality family time I drove home, alone. I stopped by Albertson’s and picked up a bottle of Avion Silver Tequila and a 12-pack of Bud Light Platinum to fulfill my plan. While the Avion chilled I poured myself some Glenlivet on the rocks and watched the season premier of True Blood. A second glass followed by the Platinum and I was in to the latest Mad Men episode.

At some point I decided my pain didn’t need booze to wash it away. The love from my wife, Gray and Ellie, along with my family and many messages from caring friends throughout the day did that. The belly aching I imagined I’d feel never came. I kind of just felt numb all day. More drinks wouldn’t result in more numbness. I’d just pass out and feel like super shit the next day.

Today sucked. Don’t get me wrong. But it didn’t suck as much as I was afraid it would. Thank you to everyone that thought of me and reached out to me today. You help to keep me “strong,” as some of you see me. Keep doing so. A week from now, I’ll need every ounce of strength I can get.

5 thoughts on “Father’s Day Edition – How Was Your Weekend?”