While hanging out at my sister’s house Friday night, Ellie, who brought her back pack full of goodies to show her cousin Liam, stumbled upon a small, square piece of paper with a rainbow drawn on it in marker. She asked me if she could keep it. I thought it was a temporary tattoo, so I said no. Not like it mattered what it was, though. Later in the night she asked me again. I told her it was Liam’s and that it needed to stay here. She didn’t ask me again. 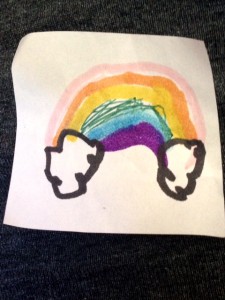 The three amigos ran wild as 3-year-olds do. The boys dressed up as The Hulk and Spider Man while Ellie shamefully wore Liam’s bear costume from last Halloween. She forced a smile for the camera but seemed uncomfortable from the get-go in it. 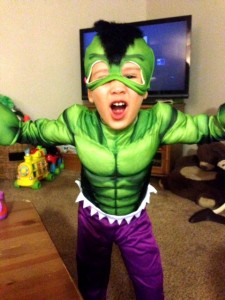 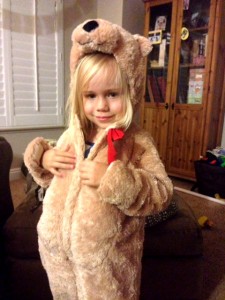 Earlier in the day my friend Sam of samcarterart.com posted a preview of a piece he created for POPzilla Gallery’s November 1 “The Burton Show,” which recognizes the films of director Tim Burton in the form of pop art. Sam called it Día De Los Rey Calabaza (Day of the Pumpkin King) as he mashed up Jack Skellington’s face from The Nightmare Before Christmas with the stylization of Dia De Los Muertos art (which I love, I mean who doesn’t?). I think I want this tattooed all over my body. EVERYWHERE. 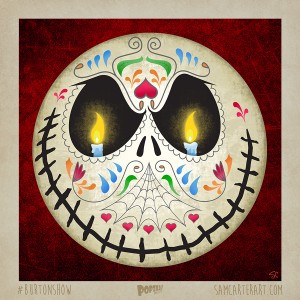 My wife and I split the kids up Saturday for a couple of date nights. Ellie and I saw The Boxtrolls, which hit movie theaters this weekend, while Gray and my wife went shopping. Weird role reversal, eh? Gray seemed timid of those trolls in boxes. I think Ellie just went because she saw I had a box of Reece’s Pieces. 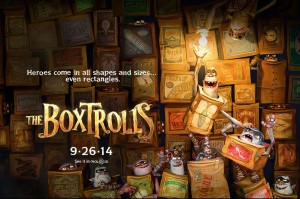 We both liked it. The visual splendor supports this unconventional children’s movie littered with made-for-adult jokes and a charming group of body-shamed trolls (thus the boxes). Oh, and it’s stop animation. Which in and of itself makes the move freakin’ amazing.

While we waited for our driver, Ellie’s eyes locked on a black limo parked outside the theater. Convertibles and limos. She loves them. 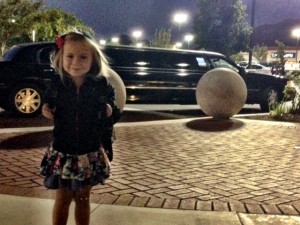 The kids and I played sidekicks to the decorating leading roles of my wife and her mom as they prepped the house for Halloween. Between Gray and Ellie, they said this was the best Halloween party ever about 33 times. At the end of the night they asked if we had to take down the decorations. Gray even wanted me to pass out candy if someone knocked at the door, because he had to go poop and couldn’t do it himself.

I asked the kids about their classmates, and what they were going to dress as for Halloween. Ellie had no idea. Gray said three of the girls were going as Elsa, Anna and the Little Mermaid. I asked what his girlfriend, Hayley, was dressing up as. He quietly said a naked girl.

I asked Gray to show me a picture of the costume Hayley’s going to wear. 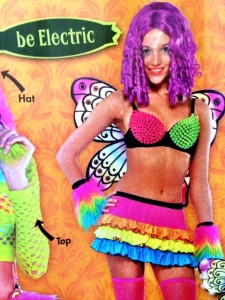 She’s just missing a glow stick and a pacifier.

Speaking of rainbows, remember that paper Ellie wanted to grab from her cousin’s house with the rainbow on it? She pulled it out of her back pack. Yep, she stole it. So we’ll be returning that to Liam at preschool on Tuesday. Sorry, Karis.

Oh, and I signed up to Pinterest while looking up Halloween decorations because they realllllllllllly want you to use their app, which requires registration. So for the few that started following me, know you’ll be disappointed. Unless you, too, are infatuated with a credit card sized knife that fits in your wallet.

Here are some shots of our Halloween decorations (I’ll post some night time photos on Instagram tonight). How was your weekend? 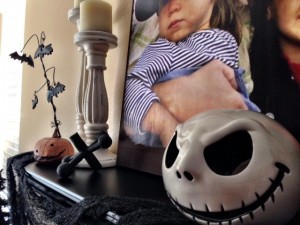 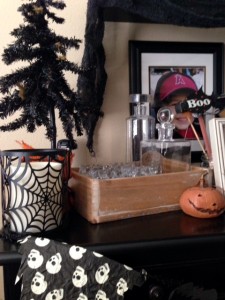 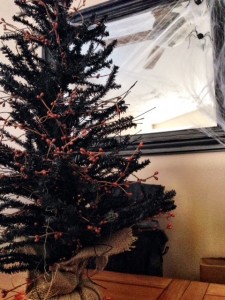 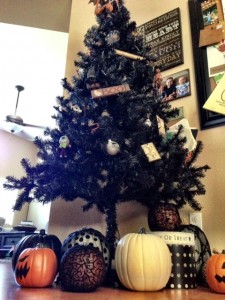 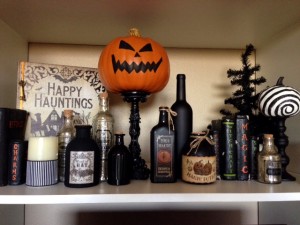 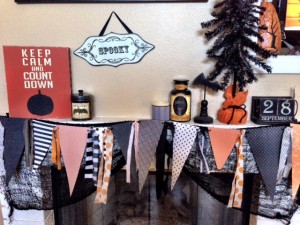 3 thoughts on “Stolen Rainbow, Gray’s Naked Girl and Decorating – How Was Your Weekend?”