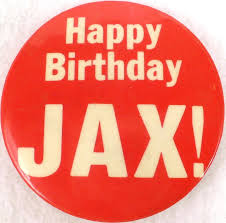 Kristina and Phoenix just walked out the door to deliver cupcakes topped with little plastic dinosaurs to the preschool that Jax went to. His teacher remembers him every year on his birthday, and her and her class sing happy birthday to him.

The baby (we don’t really call him much other than that) is napping, and Gray and Ellie are at school.

“Watch that video while we’re at school,” Gray told me while putting his pants on this morning.

It took a bit for me to register what video he was talking about.

“Oh, you mean Jax’s video?” I asked, referring to the slide show of photos and short that was shown at his funeral.

That was the one.

He does not. I told him I won’t watch it in front of him. Truthfully, it’s been a while since I’ve watched the video. But I think it’s time for Phoenix to see it and get to know his big brother. The little guy is very excited to go see dinosaurs today at the Los Angeles Natural History Museum.

All weekend he’s alternated between having dinosaurs fight to the death in his room and then apologize to each other in sweet, innocent toddler voices and playing with a figure that Kristina and I have named Scuba Steve. It’s a plastic scuba diver he got from the Aquarium of the Pacific. He thinks that the scuba diver swims up in the air, so he says that’s what he wants to do. He plays with him while wearing swimming goggles, and he asks for flippers.

But P’s excitement today makes me excited to experience it with him. It’s somewhat softened the blow of an emotional day. In a couple of hours I’ll wrap up work, we’ll pick up the kids and head out to LA. And, as always, we’ll meet up with family for dinner at Ruby’s Diner to be together.

I’ve stopped trying to figure out what Jax would be like as an 11-year-old. It’s too hard. I mean, I have my hopes. I hope he’d be kicking everyone’s ass in baseball and playing fantasy football with me and serving as my assistant general manager for my Strat-o-Matic baseball team. I hope he’d still love puzzles and dinosaurs. I hope he’d be a protective, loving and teaching big brother to Gray and Ellie. But then I realize these hopes are impossible dreams, and pain sets in.

My hope today is for a peaceful, loving day together as a family remembering Jax, honoring him by doing the things we know he loved.

If you think about it today, do a puzzle. Watch Jurassic Park. Grab a shake at Ruby’s. And smile when you think of our little man.