Friday night fireworks at Angel Stadium. Yep, we were there. Since we’re in the midst of Potty Training Boot Camp (I made this up, it’s not a real thing. Well, maybe it is. But we’re not doing anything official. And I’ll share more about how it’s going in another post), my wife brought Ellie’s Minnie Mouse potty. The twins took turns sitting on the throne in the back of our minivan in the parking lot. 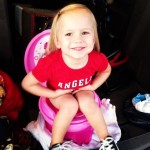 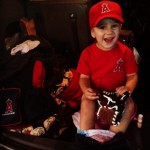 Earlier in the week, I shared Ellie’s first crush on Twitter @SethTearz:

After @HankConger16 made a nice catch against net last night my 2 1/2 y/o daughter asked who that was. I told her. “He’s cute,” she said.

In case you don’t know, this is Hank Conger: 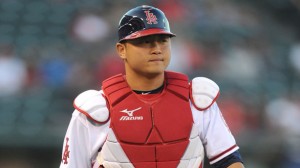 He should be the Angels starting catcher, but manager Mike Scioscia hates me and my ideas.

On the way home another minivan in the 91 Express Lane decided to make a lane change right into us. I saw the bastard, braked and honked heavily, which prompted a classic Ellie line.

“Hold on, cowboy!” she said with a tinge of excitement. I have no idea where she picked that up from.

After holing herself up in our house with naked 2-year-olds, my wife got a well-deserved break from the twins and potty training. She shopped with her mom during the day and met up with friends at night. So I assumed the role of potty training drill sergeant. And holy crap is it tough.

My head was on a swivel looking for signs that one of them had to pee or poop. I read more books this day than I had the previous two months. To steal a line from my wife, I’m tired of seeing penis and vagina.

For lunch I grabbed the Caliente Burger from Tommy’s. It came with fries and a super-sized side of shame. 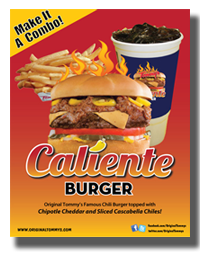 We attended the final sermon of Saddleback’s “How to Get Through What You’re Going Through” series. Rick Warren’s wife, Kay, spoke about finding treasure concealed in darkness. In short, going through life’s pile of poo and finding a diamond. Those are my words, not hers. My heart is not open to searching for that right now. Hopefully one day it will be.

We grabbed some lunch after church and then picked up Halloween costumes at Old Navy. You’ll have to wait until Halloween to find out what they are.

The NFL’s first weekend of football is in the books. And I’m already booted from my office’s pick ’em/suicide pool because Lavonte David of the Tampa Bay Bucs did this.