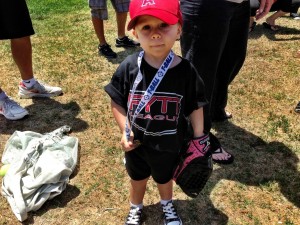 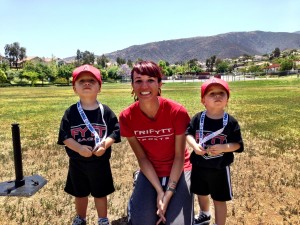 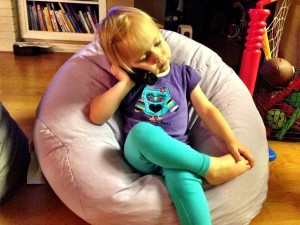 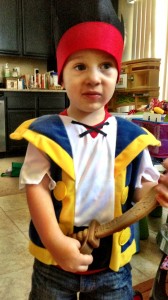 Jax’s memorial service took place in our packed church at Christian Life Fellowship on Saturday June 30, 2012. So many people came that the church had to air a live stream in an adjacent multipurpose room to accommodate the crowd.

Several people spoke, including a friend who asked if it was okay to read a post I wrote about Jax on April 16, 2011. Since the censored version was well received, I figured I’d re-post it here. I want you to know my boy. And this story encapsulates Jax’s personality quite well. 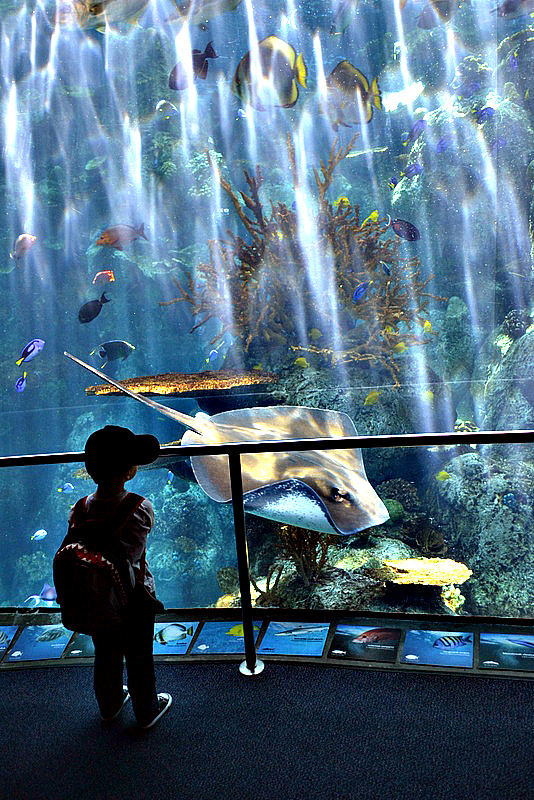 Jax gazes in awe at the Long Beach Aquarium

The Boy, my 3-year-old, is easily influenced by what he sees on television. If something catches his interest, he commits every atom in his being to that one thing. It started with Toy Story and culminated with us buying him a Jessie hat, which thankfully he’s stopped prancing around the house in.

Then came Cars, and that obsession is still rocking. In fact, he’s sitting on an office chair next to me, watching YouTube on my iPhone. I don’t know what the video is, but I hear an adult male speaking with a slight accent describing a new Cars toy he recently purchased. He’s reading the box, extracting said toy from its container and describing it in detail…and it’s creeping me out.

Sometime after The Babies were born my mother-in-law brought over Finding Nemo to keep The Boy out of our hair while we figured out what to do with two freaking babies at the same time. We popped the DVD into the XBox, tossed a couple of Red Vines at him and hoped he’d be interested. And whether it’s because Pixar has a hypnotizing strangle hold on children across America after its pact with the Devil – or they’re just very talented – The Boy’s latest obsession was born after viewing the tale of a neurotic clown fish father that pushed his son to rebellion only to have an Aussie dentist capture the son, Nemo, to give to his ADD-ridden niece as a gift and the father’s quest across the ocean with his lesbian pal Dory to find Nemo.

So now The Boy is fascinated by anything from the ocean, though he’d prefer they talk and have names like the oxygen-challenged characters from the flick. He also has two interactive point-and-play Finding Nemo books which he reads about 11 times a day that fill his head with oceanic terms and names of the creatures in the world of Nemo.

A week ago I figured it’d be fun for him to see some of these Nemo fish up close. With a plastic blue whale he is borrowing from my dad (and sleeps with every night) clutched in his arm and his shark backpack loaded on his shoulders, we made our way out to the Long Beach Aquarium of the Pacific.

Immediately The Boy found Dory and Gill from Nemo, walked under a giant blue whale hanging from the ceiling of the aquarium and watched seals bark and play.

Then came the shark tank, and out came his fucking marine biologist hat. Now the shark tank isn’t very impressive if you’ve been to Sea World or larger aquariums, but sharks are sharks and young children don’t care. There were about five different species of shark in the tank. The Boy proceeded to identify the sharks in the tank that looked anything like the sharks from his Nemo books, name them, and then educate anyone fortunate enough to stand next to him at the front of the viewing glass.

This went on for at least 20 minutes.

“Mako shark,” The Boy would announce to the three children that just walked up. Except there’s no mako shark in the tank. This aquarium isn’t that cool.

“Bruce! Here comes Bruce!” The Boy shouted every time the largest shark completed its path in front of the viewing glass. Bruce is the great white shark from Nemo. I’m sure the 25-year-old emo dude and cutter girlfriend next to The Boy haven’t the slightest idea who the hell Bruce is. But The Boy doesn’t give a fuck.

Now, The Boy is generally shy and reserved in public. But not this day. This day he was like Regis Philbin after an all night coke binge. He was loud, he was excited, and he wanted everyone else to share in his experience. Everyone.

I talked The Boy into checking out some other sections of the aquarium as I figured he had made enough face prints on the viewing glass. We came up on a tall cylinder of a tank that had orange and white striped fish. They weren’t clown fish, yet I let him call them Nemo since I wasn’t sure if they had any real clown fish at this aquarium. A girl, about 7, noticed the charm of The Boy and ventured off from her family to watch the fish with him.

“Finding Nemo,” she replied with a dash of bitch. Apparently she thought he was missing the beginning of the title of the movie, rather than just pointing out, incorrectly, that Nemo was in the tank.

“Nemo,” he answered and pointed at the tank.

“Findingggggg Nemo,” she repeated as she ratched up the bitch meter.

This went on for another couple of minutes. Now the girl had her back to the exhibit, facing The Boy, and shifted her feet left and right to keep him from having a clear view to the tank. Her mom finally noticed and scolded her for being a brat.

We made our way around the rest of the aquarium, spotted jelly fish, eels and starfish – all of which he identified thanks to his interactive books. We came across a large tank with a couple of hammer head sharks, which he made sure everyone knew, darting around reefs and coral with other fish, and large sting rays.

“Manta rays!” The Boy cursed at me. Like, how DARE I call those things sting rays.

Another dad stood next to The Boy with his two tween sons and pointed out the sting rays.

“Manta rays!” he yelled at them. Now I’m standing behind him to allow other children to get close to the glass. I’m hoping that they can’t hear this little troll yelling at them.

I had to explain to The Boy that he shouldn’t sweat it if people called them sting rays. He didn’t care; he was fired up and there was no excuse for ignorance among the patrons of this fine aquarium.

A few days later I looked up the difference between the two, and you know what? He was fucking right.