June 6 was our ten-year wedding anniversary. As you know, we were a little busy. June 7 marked our sixteenth year of our first date. So we still managed to celebrate on an anniversary date.

Before you roll your eyes and think we missed a big year, let me explain that we’re going to Chicago in July to celebrate appropriately. In the meantime, we enjoyed a terrific meal at Fullerton’s Roman Cucina. If you haven’t been, go. It’s a quaint, dark Italian restaurant with white lights, leather booths and a good-looking staff (for men and women). Start with the bruschetta. It’s ridiculously good. 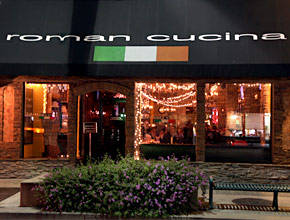 We considered catching The Internship but I pictured the old head nod move in a dark theater, so we settled on Yogurtland back at the house.

My mother-in-law took the twins to her house as my wife was scheduled to work and I had a “play date,” as my wife likes to tease, with some buddies.

As I came upon the 91 freeway I saw a sea of cars and brake lights. I looked at my phone and noticed an accident near an off ramp, so I attempted to get up to Green River by taking side streets. I hit a cul-de-sac and a parking lot for a business with an iron fence that separated about 20 gathered people from a white SUV that had gone down an embankment, a helicopter parked near an accident scene and at least five fire engines. As I drove upon the scene I saw maybe one hundred people out of their cars walking along the 91 freeway. Some had cameras, some were talking with others and all were trying to figure out what happened.

As did I. I got out of my car with every intention to ask the others among me. As I approached I got shy. Some seemed genuinely upset. I shamefully snapped a pic as well. A woman in front of me answered her phone and a few seconds later began to cry hysterically. She bent at the waist crying “No, no, no” repeatedly. I knew someone had died in the accident, and my guess was she knew the person(s). I got back in my car determined to take another freeway to my friend’s.

Later that night I found an article which explained that white SUV somehow veered off the freeway and struck a sedan parked on the shoulder with a 19-year-old male in the back seat with his seat belt on. That young man died.

I left the scene feeling somber, and I couldn’t kick that feeling the rest of the night. Typically car accidents don’t bother me. I have a job because of car accidents. But this was different. Maybe because I saw that woman crying on the phone, or I was so close to the scene, or because I see death in a different light now – whatever the reason – it shook me up.

My friend Munky is becoming a culinary creator, sparked with mentoring from his mom. We went to the Meat House in Brea which markets itself as a neighborhood butcher. The staff was super friendly and helpful and they had a big choice of meats. I settled for some steak tips and carne asada. Munky picked up some peppered bacon to chop up for his red potatoes, ranch and cheese side dish, which was so frickin’ good. 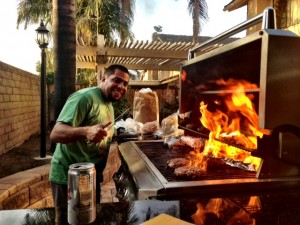 Munky calmly burns everything down.

While grilling, he almost burned down the neighborhood. Pro tip: make sure to remove the bacon grease that catches in the aluminum foil before closing the lid.

We threw down some beers, caught up and watched both the Angels lose to the Boston Red Sox in the night-cap of a double-header and the Los Angeles Kings lose to the Chicago Blackhawks (it’s hockey, people) in the conference finals.

My wife and I met my mother-in-law at Super Mex in Fullerton to pick up the twins. The joy of seeing them again is so pure and satisfying to the soul. They were excited to see us and in a great mood. But it quickly vanished when Gray started yelling in the restaurant and not listening.

After some shopping we made it home and the four of us managed a three-plus hour nap. It was divine.

I watched the Game of Thrones finale, which was uneventful compared to last week’s shocker. Until April of 2014, GoT (my guess). I bid ye farewell.