Before I get to the weekend, if you missed Bugs & Cranks posts from last week: 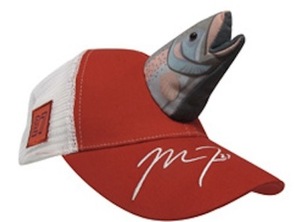 This is a real promotional item.

Drinks + a movie starting after 8 pm = Sleepy Seth. It’s a formula that never fails, no matter how much I fight it. From what I could tell, The Hangover III was meh. It sure wasn’t enough to keep me awake, but I’m also the guy that slept through Jurassic Park III in its entirety. Really, all I saw was the first ten minutes, if that. Surround sound and fierce dinosaurs be damned. I didn’t wake up until the credits. 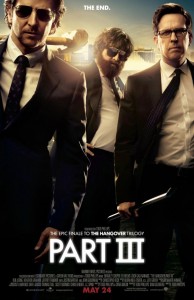 I mostly stayed awake for The Hangover III but head-nodded my way through the middle. Basing a script around Chow pretty much kills any chance that I’d enjoy the movie. He’s a good bit character, but that’s it. I don’t think it’s a coincidence that each movie in the series got worse as it increased Chow time. David Blaustein at ABC News is right on with his review of Chow and the movie.

Seth’s Review: Wait for it to hit Netflix or HBO/Starz/Cinemax/Showtime, or borrow someone else’s copy.Just don’t pay for it.

Lazy day. Ran some errands. Took a nap. Went out to eat since Gray and Ellie begged “to go for a ride.” Two families shared a table directly behind us with the parents on one side and kids at the other. A 7-year-old played with her parent’s smart phone and Gray picked up that Mickey Mouse was somehow involved. So for the next 15 minutes I had to keep him from turning around to watch the show. Which is irritating. Our food was out and it was time to eat but his back corkscrewed towards the hypnotizing glow. A fork finally brought his full attention to his chicken strips.

I use my iPhone a lot. My wife hates it. So I’m not one of those purists against technology or anything. Maybe it’s just the old guy in me coming out. But does a 7-year-old really need to watch a show or play a game in the restaurant, especially when she’s there with other kids her age? Say it’s a toddler or two with just mom and dad. I can kind of get it, since there’s a decent chance that toddler will scream and yell and distract other patrons in the restaurant. But a 7-year-old? It irked me.

Earlier in the year, Henry Yates, a British journalist wrote the following in The Telegraph as he questioned the use of iPads at the dinner table.

“I reckon we’ve got to fight against the easy option,” he writes. “As work’s tentacles encroach on our family time (tentacles facilitated, it has to be said, by on-the-move access to emails), our mealtimes are becoming one of the few isolated chances to really connect with our kids. You know, the old-fashioned stuff: talking to them, listening to them, asking about the school cake sale, humouring their daft little stories punctuated by endless ‘ums’ and ‘ers’. Strengthening your family’s foundations for the buffeting to come.”

The phone/tablet is the easy option. That struck a chord with me. Give your kids the chance to enjoy eating out, talking, coloring and people watching (Gray’s favorite). If that doesn’t work, then light the beautiful brats’ faces up with your gadget. Note to self: weave “daft” into my writing more often.

A day date for the wife and I. We brunched it up at Goodfella’s Cafe in Corona and followed that with a viewing of The Great Gatsby. Two movies in three days crushes my previously projected figure of two in one year. Now Gatsby is a movie to spend your cash on in the theater, as the visuals and experience are that good. Plus, Lenardo (Hi, Munky) DiCaprio is super dreamy. Did his orange face look like it was rubbing off to anyone else?

We went to my wife’s grandpa’s place in Pico Rivera for a barbecue (burgers and ‘dogs). She had to work at night so my mother-in-law kept the twins over night at her place so I could get to work on time in the morning.

The Angels and Dodgers began a four-game freeway series at Dodger Stadium and this guy blew a 6-1 Angels lead to snap an eight-game win streak.

Really a bad time to have a bad game- felt like I threw too many strikes for them to hit.should have just walked gonzalez.

Isn’t it always a bad time to have a bad game, C.J.? In a pissy mood the rest of the night, I wandered around the house aimlessly. My grand ideas of a night home alone evaporated. I just wasted three-plus hours to watch the Angels blow that game. Shit.

With work on the horizon, I’ll go nod off to Mad Men and dreams of Joan Holloway throwing airplanes at my desk.