Despite the breakup letter I wrote to the Angels at Bugs & Cranks last week, the Angels dominated our television Friday and Saturday. Sure, they swept the lowly Houston Astros over the weekend, but remember that those Astros won six of nine against the Angels, including a four-game sweep in their last series. So for the Halos to wake up and win games they’re supposed to is a big thing. Since I wrote that letter, the Angels are 6-0. I’m not sayin’, I’m just sayin’.

I really have no idea what I did the rest of the weekend. That’s not a good thing. Frickin’ aspartame. I didn’t know increased gray chest hair was also a side effect of too much Diet Coke.

Five months after Jax’s second birthday I took a day off and, along with my wife, took him to see his first movie in a theater. He obsessed about everything Toy Story, so we took him to see Toy Story 3. His blue eyes blew up like hot air balloons when he entered that huge, dark space. He sat on my lap when the movie started, his face concentrated and serious and he didn’t budge once for the entire movie.

The twins, now a month younger than Jax was, witnessed movie magic for their first time with Monsters University on Sunday. They have seen enough commercials to know about the Monsters, Inc. franchise, however they haven’t seen the movie. 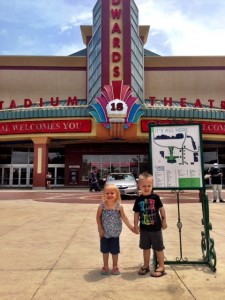 Ellie & Gray outside the movie theater.

Ellie, the more cautious of the two, hesitantly walked in to the theater with her brother and my wife as I grabbed some nachos to snack on and a Diet Coke big enough to bathe in. When I arrived she was sitting on her mom’s lap and Gray proudly sat perked up in his own seat. He was loud, excited and ready for the experience.

The previews were too long for a children’s movie, but I at least came away with this ingenious nugget.

I wasn’t a Lego kid, but holy crap that looks great. Gray had moved to my lap by this time, so I whispered that we needed to see that. He agreed.

By the way, we learned with Jax, who had very sensitive hearing, to bring hooded sweatshirts to the movies since the volume is generally loud enough to melt ear drums. So while it was 97 degrees outside, Gray and Ellie bundled up to soften the noise. 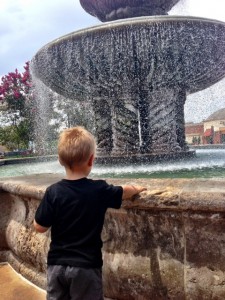 I was two minutes away from jumping into that fountain.

They did great. Ellie sat on my wife’s lap the entire time and only grew restless in the last ten minutes. Gray’s tush must’ve gotten sore so he stood for a bit while munching on Teddy Grahams. They stayed quiet, they were engaged and it seems they’re ready for more movies. It helps that Monsters University was cute, well-paced and had some laugh-out-loud moments.

My parents watched the twins over night so my wife and I went on a hot date. To Ruby’s. And that’s it. I kind of felt like the 80-year-old couple in the booth behind us. Including the gray chest hair. 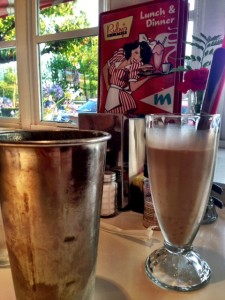 We did talk about our upcoming Chicago trip, though. If anyone has any recommendations, please let us know!

While I was off of work for eight months I caught up on a lot of television. Specifically, I watched the entire The Wire series and Dexter, since my dad would ask me at least once every other week during a season if I had Showtime and if I saw the last episode. AND HE DOESN’T EVEN DRINK DIET SOFT DRINKS. 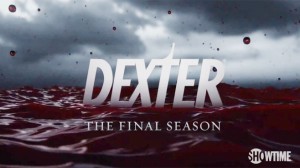 “How can you watch that?” she asked me last night as she played on the iPad while we sat in bed and I watched the first episode of Dexter’s last season. The Miami Metro Police Department had just come across a dead body with the victim’s skull split in half and a chunk of brain removed.

It’s a fair question, since the thought of death is forever changed for us now. The show is so over the top that it’s just a way for me to escape life for an hour. Plus, have you SEEN Dexter’s nanny?