My buddy Sam hit me up with two extra suite tickets for Friday’s Angel game against the Tigers, courtesy of his lovely new bride’s employer. My wife had a rare Friday night off of work so we dumped the twins at my parents, drove through Del Taco and joined 5,000 other cars trying to enter the Angel Stadium parking lot. 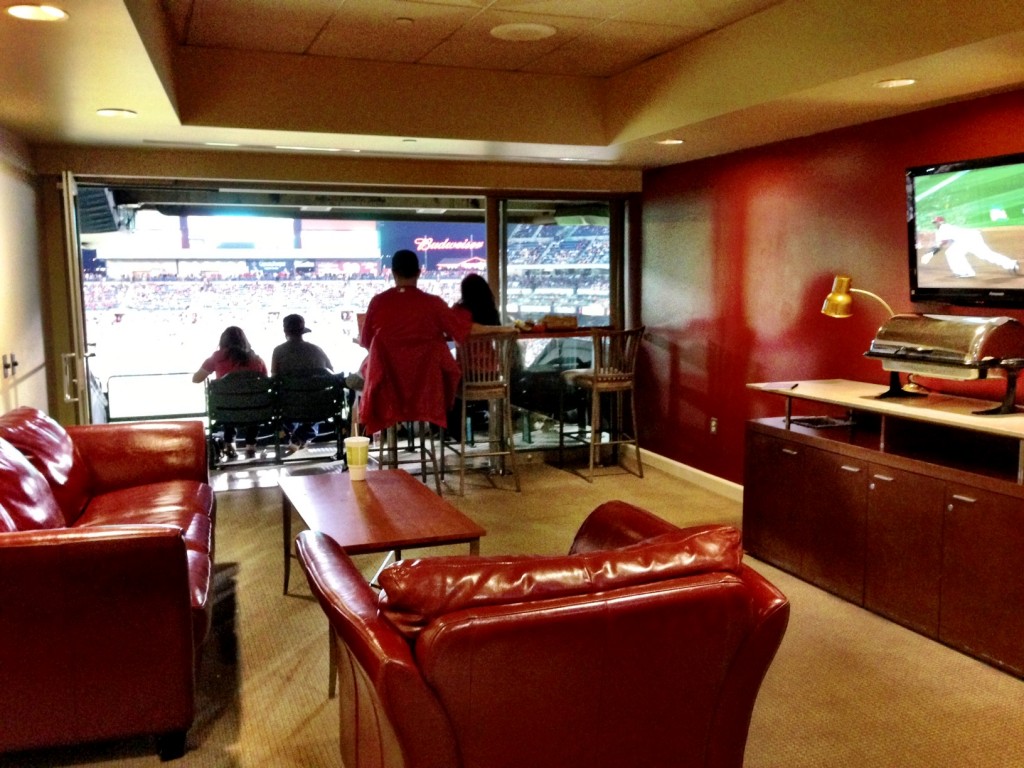 Did you know there is a parking lot solely for Lexus vehicles? It’s fucking awesome. We rolled right up in their Lexus and parked away from those dirty, classless Ford, Honda and Hyundai’s. Peasant pigs. 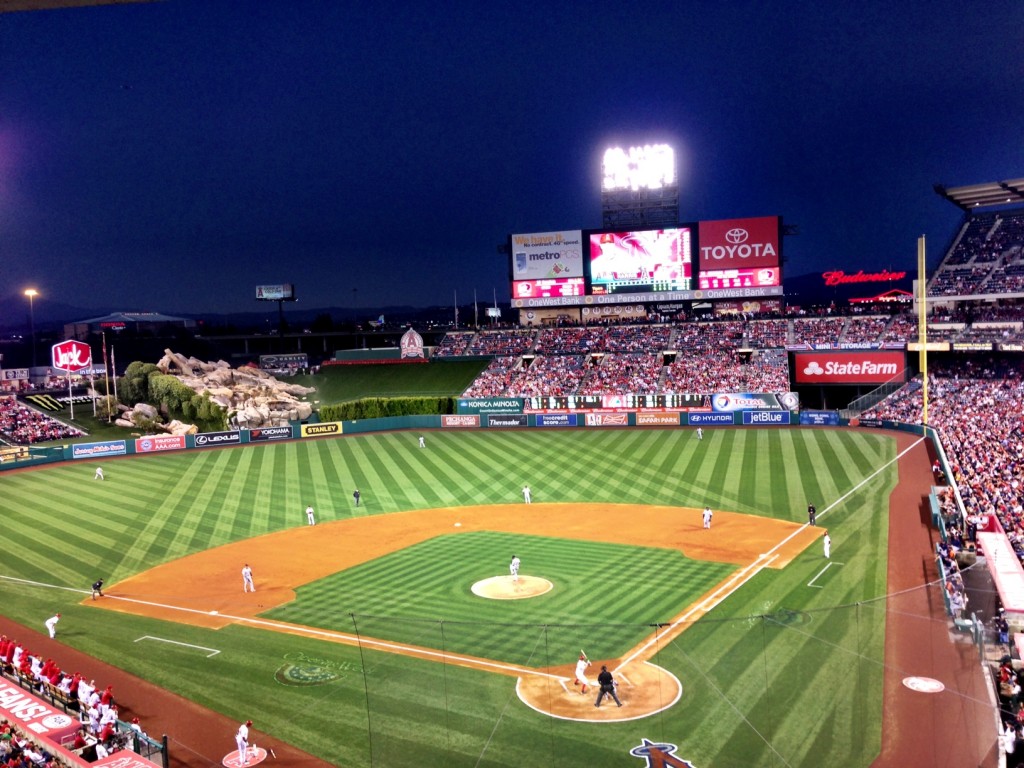 Our view from the Angel Stadium suite.

Torii Hunter returned to Anaheim for the first time since leaving the Angels this past winter as a free agent. Hunter is Jax’s favorite player. My odd brain often wonders how Jax would have handled the news that Hunter left the Angels. I’m confident he wouldn’t have cried. Short of Captain America leaving Marvel to “find himself” in a temple on a South American mountain, Jax wasn’t going to cry about anything. But would he just like Torii on the Tigers now, or pick a new Angels favorite? 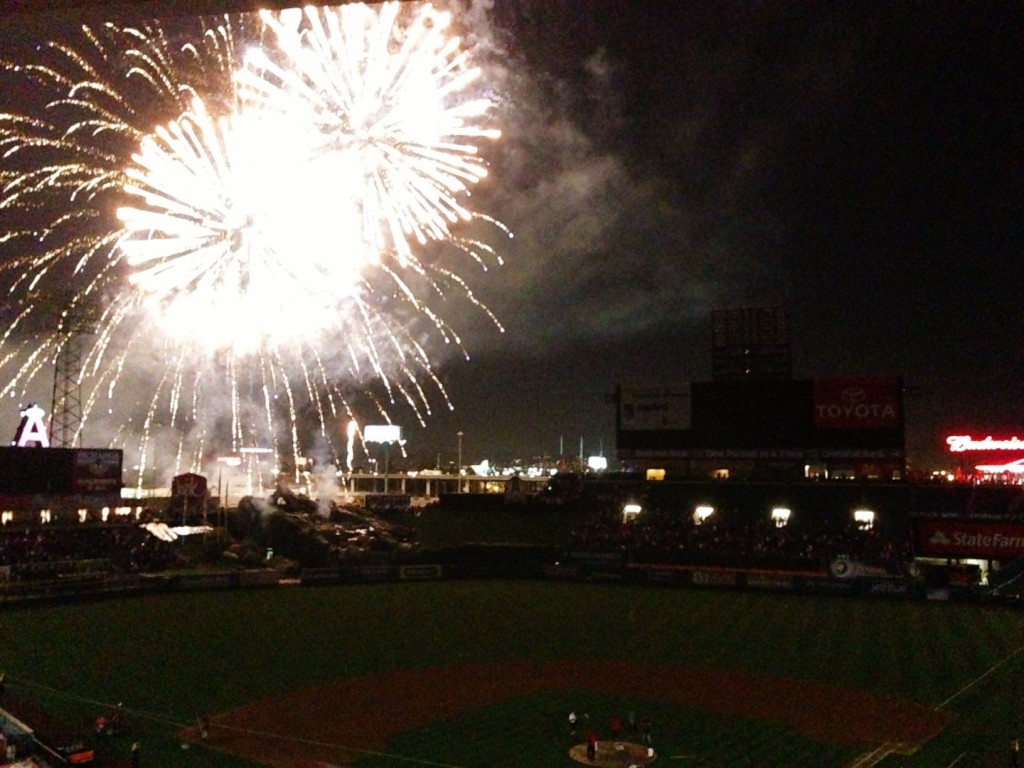 We were still walking to our suite seats when Hunter came to bat. Angel fans gave him a warm standing ovation, Hunter scored the only Tigers run and the Angels won the first of three games against Detroit. And as they do every Friday night for Big Bang Fireworks Night, the Angels organization treated us to a show. 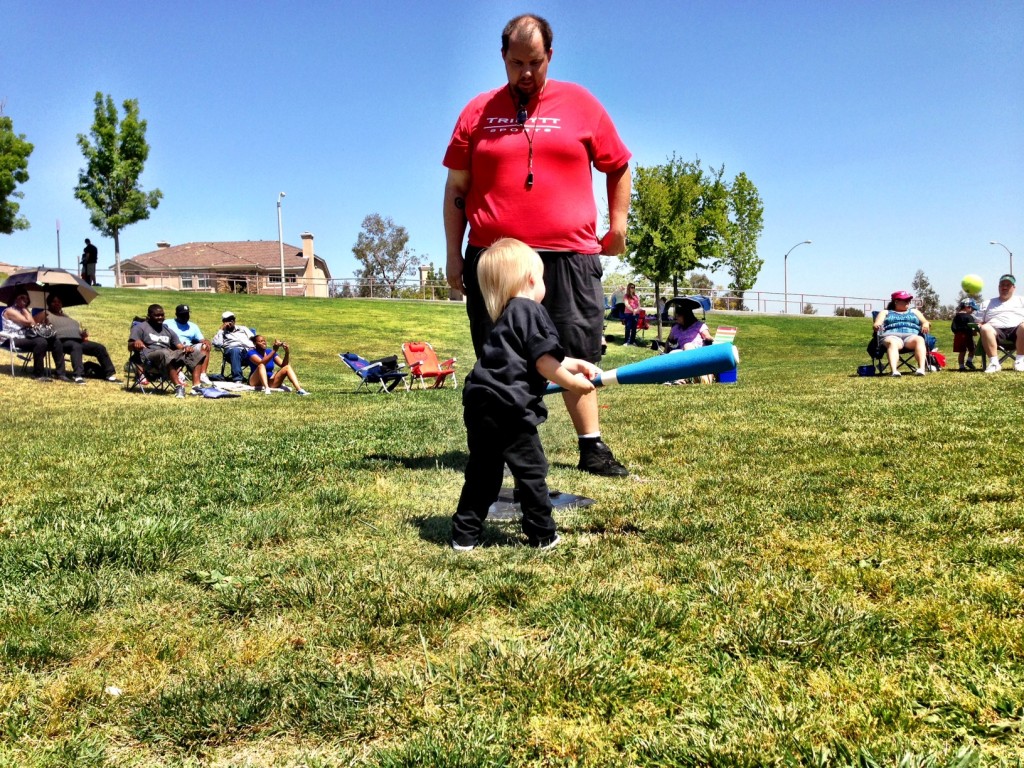 Ellie’s coach is a big dude.

Gray and Ellie played their first t-ball game as Team Black against the dastardly Team Burgundy. Ellie broke out of the statue act from last week and had a good hit in her second at-bat and flashed grit and a gun in the field. Gray, meanwhile, stroked two hard ground balls up the middle and refused to wear a glove while playing first base. He even chased down grandma for a water break in middle of an inning.

While the twins “napped” I tweaked resumes and cover letters and applied to three jobs. The Fortune 100 insurance company I work for decided to centralize its operations and our charming Ontario office is closing in August. Dopamine shot through my body from the sense of accomplishment. But that will fade fast when no one calls.

My church is closing within the next three weeks as a result of financial difficulty. My parents left a mega church in the ’80s to follow a friend and pastor who established the church I grew up in. At this church I:

Jax’s memorial service was held at this church. It’s the only church he ever knew. It’s the last place I saw his physical body. He was breaking out of his shy shell here, too. This church body has showed so much love and support to my family I know I will never feel again. What breaks my heart the most is not having that same support to surround Gray and Ellie. I’m on the verge of sobbing as a type this. The more I think about it, the more I can’t handle it. I sensed it coming, and I thought I’d be okay with it. But I’m totally not.

At night, as my wife prepped herself for a night at the hospital, I took Gray and Ellie to my parents for dinner. First we met at a baseball field for some t-ball practice. I had this fantastic idea that letting them run around on a real field with bases and grandma and granpda and no other distractions would increase their short attention span. But that backfired. They had more fun using plastic bats as telescopes in the dugout.

But then something strange happened. Something eye opening. Gray grabbed a small soccer ball some friends gave the twins out of the bag of bats and wiffle balls. He started kicking it around, moving from the first base side out into left field. He dribbled the entire time. And he dribbled like he’s been doing this for a while.

Neither my wife or I like soccer. Neither of us played as a child and we don’t push the sport, so his performance today is completely natural. Which means I’ll probably spend my 40’s driving him to club matches (games or matches? WTF SOCCER!) throughout Southern California every single weekend. Shit.