It’s been a couple of weeks since I last posted. Here’s what’s going on: 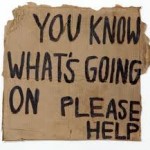 So I went silent. It hardly seemed important to share my weekend, a stupid animated gif or whatever was kicking around in my head and heart.

On my Facebook page I shared a bit of what was going on when someone asked where my posts have been. Which led to encouragement from a couple of people, messages and texts of support and some songs/videos from a reader. I can’t be fixed. But I appreciate everyone trying.

(skip to the two-minute mark for the beginning of the song, if you wish)

I also received Peter Gabriel and Kate Bush’s “Don’t Give Up.” The video is cheesy-ass but the lyrics are strong and appropriate, especially Bush’s haunting chorus:

Don’t give up, we don’t need much of anything
Don’t give up ’cause somewhere there’s a place where we belong
Rest your head, you worry too much
It’s going to be alright when times get rough
You can fall back on us, don’t give up, please don’t give up

You can watch the video here. WARNING – There’s a whole lotta hugging going on.

I have every intention of returning to a normal posting schedule. I feel beaten, but I’m not going to give up. This is a place where we all belong. To be real. To share. To cry, to laugh, encourage and console.

Thank you for reading. Yesterday, today and tomorrow.